Beef Market Predictions – 2021 and Beyond

The State of the Corn Market 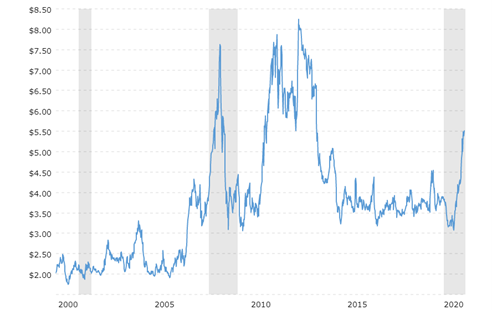 Before we address the corn market, we would like to express our gratitude to our team working out on the yard during this extreme weather! They are working incredibly hard caring for the cattle, keeping water flowing and machinery working. They even take care of the office team by shoveling the sidewalks and porches which we certainly appreciate! Thank you so much for everything you do!!

While we face extreme weather, we also face a highly volatile corn market. Corn prices reached a low around $3.19 per bushel during the summer of 2020 which was comparable to their 2009 level. Just half a year later, corn prices climbed to more than $5.20 per bushel in February 2021. This marks an 8-year record high and one of the most volatile trading periods in almost a decade.

So, what exactly is driving corn prices and volatility?

One reason is rising domestic and international demand. U.S. corn was in high demand in 2020. Exports were even up 80% compared to 2019. While demand rose worldwide, China contributed two thirds of the growth driven by their plan to rebuild a more independent domestic pork industry out of concern of the Asian Swine Fever. Since China cannot cover its rising demand for corn domestically, the USDA estimates China will import 16.5 million mt of corn in 2020-21 compared to an estimated 7.6 million mt in 2019-20.

Domestic U.S. demand is rising as well, primarily driven by ethanol producers who were hit hard by the 2020 recession. However, improved vaccination efforts lead market participants to predict a faster economic recovery than expected. This will also boost the demand for ethanol which accounts for 40% of U.S. corn consumption.

U.S. corn production estimates for 2020-21 have fallen by 9.3% to 14.5 billion bushels during the past six months. The year-end stock estimates fell by almost 50% to 1.7 billion bushels. A major reason is competition from soybeans which are on a similar growth cycle and therefore direct competitors when it comes to farmers’ crop planning. Soy prices per bushel rose from $8.50 during the summer of 2020 to almost $14 in February 2021 meaning farmers will need to closely watch price futures of both corn and soybeans in 2021. Other major corn exporters like Europe and South America will not be able to close the gap. Ukraine suffers under a dryness, the E.U. faces political struggles and Argentina closed its border to serve their domestic corn demand.

It goes without saying, the frosty conditions in the U.S. will impact corn prices by influencing supply, as well as demand. At High Choice Feeders, we are watching the market closely and hope for stability to return in 2021.

May is National Beef Month